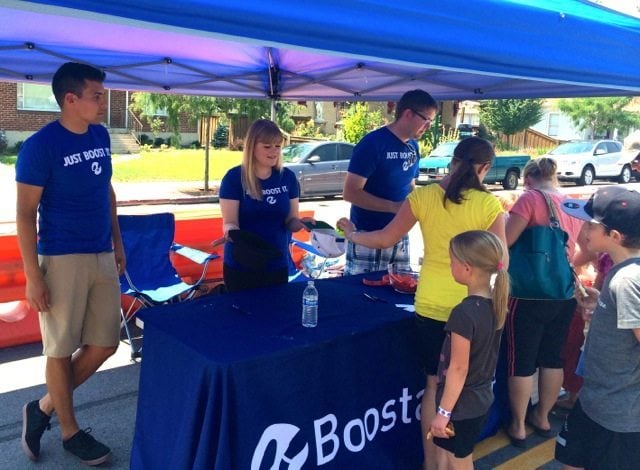 This last Saturday, Boostability sponsored a booth at Provo City’s “PlayStreet Provo” event.  PlayStreet Provo is an event put on each year by Utah Valley University and Downtown Provo, Inc.  With the hope of encouraging locals to park their cars and get out with their families, PlayStreet Provo is meant to encourage everyone to explore their city by foot.  “As a society we are not used to walking and exploring on foot,” PlayStreet says, “To really get to know a downtown, however, it is necessary to get out and walk or ride your bike.”

“This was really a great event,” says Kelly Shelton, VP of Marketing at Boostability.  “There were so many families.  I think all of Provo came out to this event.”

As an effort to reach out to their local community, Boostability provided fun games for kids and their families to play as they strolled Provo’s Main Street.  “Kids were so excited for our White Hat versus Black Hat game,” says Kylie Brooks.  “The point of the game was to throw each ball into the White Hat for a prize and it really seemed to be the most popular game there!”

Proud to be part of the local scene, Boostability gave out over 1,000 free ice cream treats to Provo families.  Kelly Shelton summarizes the event for Boostability perfectly when he says, “It was a lot of fun, we look forward to being out again next year!”