May saw the first Google Core algorithm update of the year. And leading up to it, we saw a bunch of ranking fluctuations indicating a change was coming. Check out news on this and other SEO topics from May 2022.

One of the biggest bits of SEO news happened with the first Google Core algorithm update of the year called the May 2022 Core Update. It took about 2 weeks to deploy starting on May 25th. And like many updates, the reactions and impact were felt within the first 24-48 hours. Semrush showed some major volatility among global SERPs from May 26th through the following two weeks. Rank Ranger also did a report comparing the most recent two algorithm updates, May 2022 and November 2021. Both show sever SERP volatility, but saw greater position changes with the most recent update. While Google never reveals exactly what’s included in these updates. But data and feedback from the SEO community says that this update was significant. Most notably, significant ranking shifts happened around keyword intent and content length. Long-form content is currently ranking en mass and rising in rankings. Gone are the days where quick blogs with less than 1000 words will get your site ranking. Current backlinks were also a major contributor in this update. Pages that had no links or only internal links dropped from top positions to the bottom of page one or even page 2 on desktop. Websites that improved overall had more backlinks built into the domain. No matter the data, this update appeared to be very significant.

In May Google also held its yearly I/O developers conference. The opening keynote address listed a bunch of new updates and products like a new Anroid operating system, phones, and earbuds. And they also touched on a new topic we’ve mentioned before called Multisearch. In the past we’ve learned that multisearch lets you browse by images and text at the same time. But later this year, Google is also adding a “near me” feature as well. So you can search by a picture of a dress you like, add the word “green”, and by your location to get a targeted results. Additionally, it has a “search within a scene” feature that scans a busy picture to help you compare different items within the same view, like different types of cheeses.

Within Google Maps, which is getting more and more attention from Google developers, there is now an option to basically put yourself in the map. Immersive View gives a 3D overhead perspective of supported locations. So basically you can see what it would be like to be out in a specific location like London, or see what a restaurant layout looks like.

Under the technical SEO umbrella, Google also released some information about sitemap extension tags in what they called Spring Cleaning. After some evaluation of sitemap extension tags, they officially decided to deprecate some tags and attributes to remove them from documentation. As of August 6, 2022, these tags will no longer impact indexing. Google says the goal is to reduce codebase complexity and to remove the clutter from many sitemaps. See the effective tags below. Outside of Google news, Ahrefs posted a very interesting study about link effectiveness we wanted to share. While the argument shows up every little while that “link building is dead”, time and time again we’ve learned that it’s not. Ahrefs says that since “January 2013, 66.5% of the links pointing to 2,062,173 websites we sampled have rotted.” Meaning, the links no longer work, or are no longer relevant or important. They point out that not a lot of small sites have link rot. But the bigger the site, the more links have expired or no longer provide value. Ahrefs sites that links can be lost for a variety of reasons:

Video continues to grow more and more important in marketing. Not just for TikTok and brand awareness, but in SEO as well. From Barry Schwartz on Search Engine Land, Google will soon release a new report on Search consult specifically for video pages. The video page indexing report will be under the Index tab under “video pages” This will help you know what video pages Google finds while crawling your site, figure out why a video might be unindexed, debug and fix issues on video pages, and initiate a recrawling of known URLs. As you create videos for your site, even those that you repurpose and use on other platforms, this can be a huge tool to better help these video pages rank.

And as always, we’re tracking SEO news constantly so you don’t have to. Check in with our blog regularly to learn the latest search news, and learn about different important SEO elements for your website. And if you need help or want to learn more, contact us! We offer white-label SEO services for our partners to resell. And we’re the best in the business. Contact us today to learn more!

How SEO and CRO Should Work Together 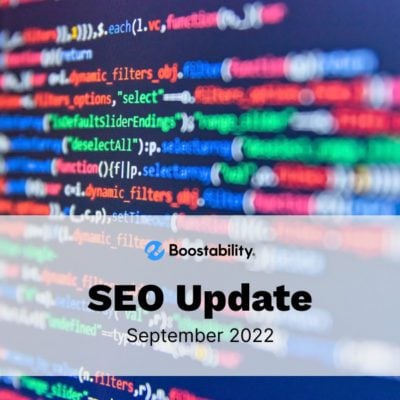 What is Semantic SEO?